Yoga for All Ages

I like the delicious lifestyle. Healthy, whole foods prepared gourmet style … exercise that is fun to do and makes me feel good rather than being a chore … and travel that ignites my senses and incorporates my healthy lifestyle. And that’s why my Joyful Heart Yoga retreats have been so popular over the years. I’ve organized over 20 retreats in the last 10 years. We go to great places, we have a lot of fun, and we don’t take ourselves too seriously. 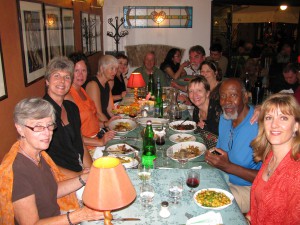 I got started on these retreats in 2003. For some reason, Costa Rica started popping into my mind. I didn’t know anything about it or even exactly where it was, but it kept calling me and wouldn’t leave me alone. I looked it up on the internet, and soon became fascinated by the rainforest and convinced that I absolutely had to stand in the rainforest before I turned 40. I saw  green vegetation in my meditations. 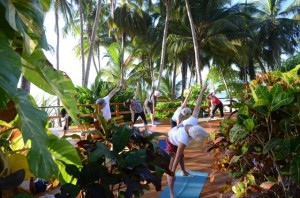 Unfortunately, I was a single mother who made a living teaching yoga and couldn’t even afford to take my son to the nearest beach for a weekend. But the universe made way. I got a nice tax refund that year, and while running errands I ended up passing a travel agency. I went in and said I was just curious to know what it would cost for two people to go to Costa Rica. Of 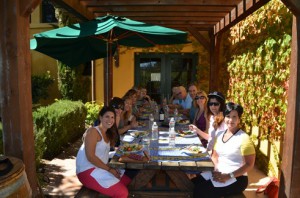 course, a packaged tour was almost exactly the amount of my tax refund, so I bought two tickets and went home and told my son we were going. He didn’t seem too sure about whether or not that was a good thing, until he looked at the brochures and saw all the fun things we were going to do, like zip lining, horseback riding, and seeing monkeys and exotic birds in their natural

habitat. My mother was very angry with me. She thought it was a waste of money and that I had a lot of more practical needs for that money. She was right — I needed new windows on my house — but when the universe calls, it won’t stop ringing until you answer. 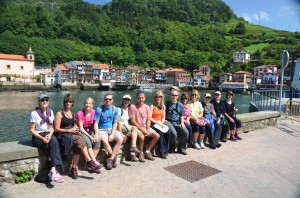 So Collin and I went to Costa Rica and had a wonderful time. The new sites and sounds were thrilling, and the rainforest was every bit as amazing as I imagined. I felt so good there, so at home. On the way over, Collin was worried about not having TV, but we immediately forgot about our cell phones, TV, and everything else except for what was right in front of us. We were fully present. I thought of my yoga students and how they would really be able to appreciate this place. 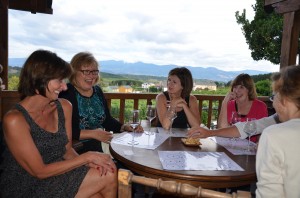 When I got home I started researching yoga retreats, but most of them were in tents and had shared bathrooms and I knew that my students wouldn’t want that. So I called the agency that guided Collin & I around, and they told me that if I could come up with 10 people, they would provide a guide, a driver, and a bus, and I could create the exact kind of retreat that I wanted. So I created my own yoga vacation where we would really experience the country, rather than just drop in. We’d spend lots of time outdoors; we’d learn about the country, the people, and the wildlife and plant life; and we’d practice yoga twice a day. We’d eat their food, but we could eat whatever we needed to sustain our health and energy. So meat eaters could eat meat and vegetarians could eat vegetarian. There were no restrictions like there are in so many other retreats. I was really hoping I could gather up 10 people, but I ended up with 30! We had two guides, two buses, and two drivers. It was a big success, and everyone really enjoyed the experience. I figured that was it, but then someone said, “Why don’t you do it again next year?” I didn’t know if I knew that many people to do it again, but I decided to put it out there and see what happened. And we did it again, and again and the retreats kept getting better and better. 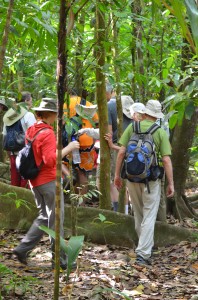 I decided to limit my groups to 20 people so it would be easier on me and on everyone else. When I got married, my husband suggested that I branch out into Europe, so we’ve since done retreats in Italy and Spain. When my son grew up and moved to California, I discovered some wonderful places there and we did a beautiful retreat in Santa Barbara. The places change, but what stays constant is the camaraderie of the group. The groups are always different: sometimes we’ve had lots of couples, sometimes mostly singles, and often a mix of both. We get people from a huge variety of professions and people who’ve lived and traveled in many different places, so we get to talk to people outside of our usual social circle. But our common love of nature, beautiful sights, learning, good food, and yoga always quickly gel the group. We have so much fun, and there is so much laughter. I love when I step away and I can hear my group in the near distance laughing and laughing. The joyful heart yoga thing just spreads. These yoga retreats are really very cool vacations. Some attendees enjoyed them so much that they asked me to organize similar vacations (without yoga) just for their families or friends, and they’ve been very happy with the results. 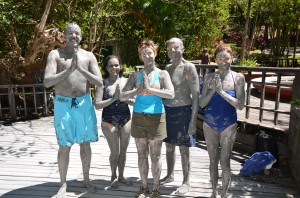 My trips are great venues for solo travelers, friends, and couples. We eat together and do our planned activities and yoga together, so you can be with the group and make new friends, and you can also step away and have some privacy when needed. We’ve made lots of new friends, and I’ve had a few people who’ve thanked me for introducing them to their new life-long friends on the trips. I’ve introduced many people to yoga on these trips. You don’t have to have any previous experience to join us — I design the classes to be just right for everyone. 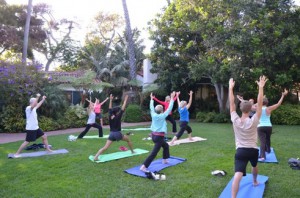 I feel so fortunate to be able to combine travel, yoga, and healthy living and share it with others. As the economy has shifted, there have been ups and downs and times when the groups were smaller, but no less wonderful. And this is the first year since I started that we aren’t going to Costa Rica. That feels weird, but I stay attuned to the universe, and the universe moved in a different direction this year. Retreats for this year are in La Jolla, California and Spain. The itineraries are excellent, so please visit the web page for each, and let me know if you have any questions. I hope you’ll join us. You will be in for a wonderful experience that will stretch and nourish your body, open your heart and mind, and enliven your soul.

Hi Everyone! There’s a new blog in the family: Joyful Heart Travel. With all the yoga retreats and personal travel I’ve organized over...

Get Ready for Joyful Heart Yoga in Costa Rica 2016!

I’m in the middle of preparations for next year’s Joyful Heart Yoga in Costa Rica trip, and I’m getting very excited. There’s...

Another video from Joyful Heart Yoga in Spain

We did four hikes on our last Joyful Heart Yoga retreat in Spain, and to me this one was the most beautiful. It was also the most challenging as it...

Please subscribe to get the latest videos and posts.

My first children’s book is available on Amazon! Click the book for more information.

Check out our sister site!