I have been a life-long exerciser, and while most forms of exercise can bring a feeling of relief or elevate your mood, I’m here to tell you that yoga is a much more powerful medicine. I was a runner for 16 years, until I developed chronic tendonitis in my hip. (Cured by not running.) I did karate for years. I bike, hike, dance, do pilates, and a multitude of gym-type exercise classes. But never has anything affected my mental and emotional well-being like yoga.

Yes, other exercises make you breathe and sweat, and that feels good. You can even get a runner’s high. But yoga is different. When I started a deep practice of yoga, I could feel old, stuck emotions that I wasn’t even aware of being released from my tissues and working their way up and out of my body. Sometimes after a practice I’d be aware of a lot of emotion stuck in my throat — stuff I had never talked about, or thought about, but was there nonetheless affecting the way I carried myself, the way I thought about myself, and the decisions that I made for my life. There it was, presenting itself for me to examine and acknowledge. Sometimes I’d need to do a little more work — more breathing, more yoga, or even energy work like Reiki — to get it to move all the way out of my body. Once out, I had more inner space and I was free from the old stuck behaviors. With continued practice, more and more stuff was released and I became less fearful, less judgmental, less likely to make a decision that wouldn’t be good for me and much more open, accepting, and understanding of the human condition.

How does yoga do this? First, there is a level of focus and concentration that is not there with many other exercises. We start by breathing and eventually train the mind to focus inward. We are in odd positions and often off-balance, so the mind is forced to pay close attention to the body. Secondly, we twist and bend, and our muscles and even some organs get squeezed, and then we open up and create space and refresh those muscles and organs. This type of motion wrings out or moves old, stuck stuff.

Also, there is more stillness, so the witness part of our consciousness which is able to watch the mind, starts to notice how the mind reacts to stress, boredom, or fear. We start to see how the mind actually makes up stories that aren’t true. When we see how the mind works, we stop putting all of our faith in our thoughts. We realize that our thoughts are often polluted by outside influences, distorted self-image, long-ingrained beliefs, and misunderstandings. We can see how emotions are fleeting. One can rise up and feel like the most important thing in the world. But a minute later it completely disappears. We can pull it back and wallow around in it if we want to suffer, but if we let it do its own thing, we can figure out a way to be centered even when chaos swirls around us. We figure out that we don’t need to ride up and down with our emotions. We can feel them and be fully alive — yoga is not about shutting down and trying not to feel — but we also feel it when the emotion leaves, and we let it go rather than continuing to feed it.

With most other exercises, I can plan out a whole scenario, compose a blog post in my head, or mentally chew on an issue in my life. Yoga forces us to slow down and pay attention on a level that rarely happens in our society today. There is so much inner wisdom that has been lost to us, and yoga can show you how to tap into that. After a session of yoga, my mind is clear and that’s when I’m really able to make the best decisions. It may take some time and practice to slow down and train your mind to focus inwardly, but it’s well worth the investment. It will change your life for the better.

yoga off the mat

Get my new video! This is a full 30-min face yoga class that you can watch any time. It includes exercises, massage, lymph drainage, immune support, and relaxation techniques. $20 and it’s yours forever! Payable through PayPal or a credit card. You do not have to sign up for a PayPal account to purchase. 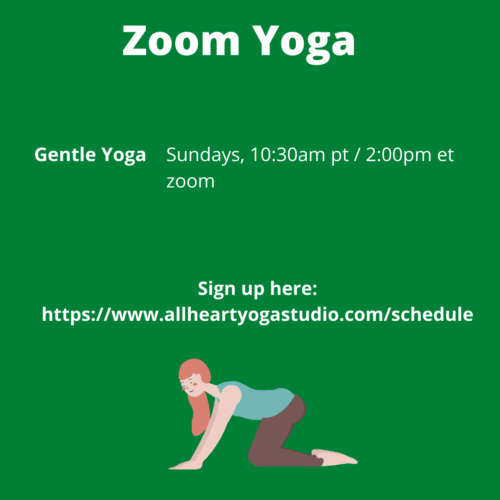 I love this makeup for my mature skin!

This is a perfect complement to face yoga and is helping me to put my best face forward. If you have any questions about it, you can contact me here, or on Facebook or Instagram. Use this form to get a free color match. You can shop here.

My first children’s book is available on Amazon. Click the book for more information.